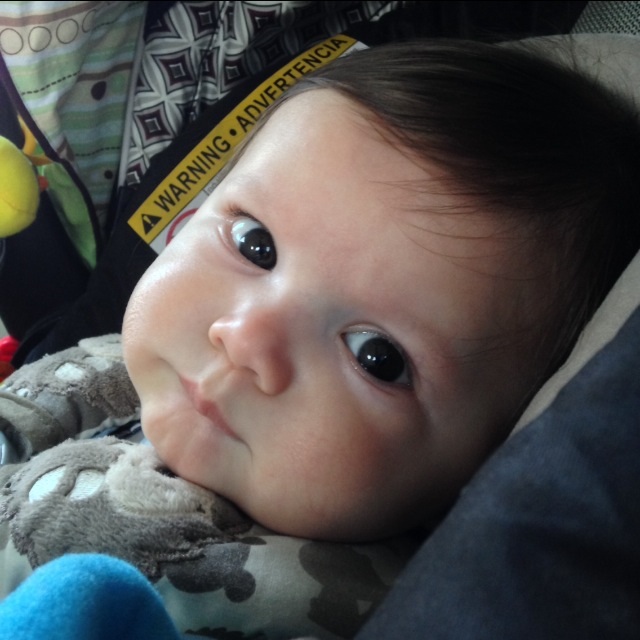 This little nugget has gotten SO big and is doing so many new things these days!

He’s been sitting upright and playing in his Excersaucer for at least a couple of months now, but now he can actually reach ALL of the toys and entertain himself for quite some time. 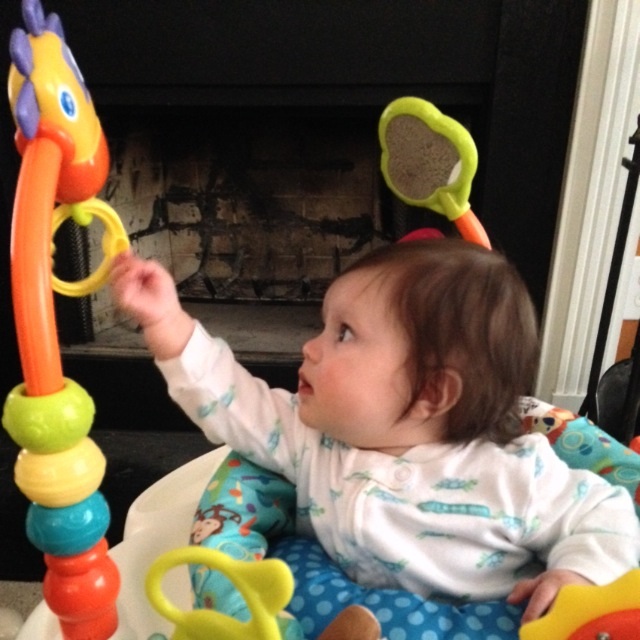 He’s also taken to chewing on his feet… 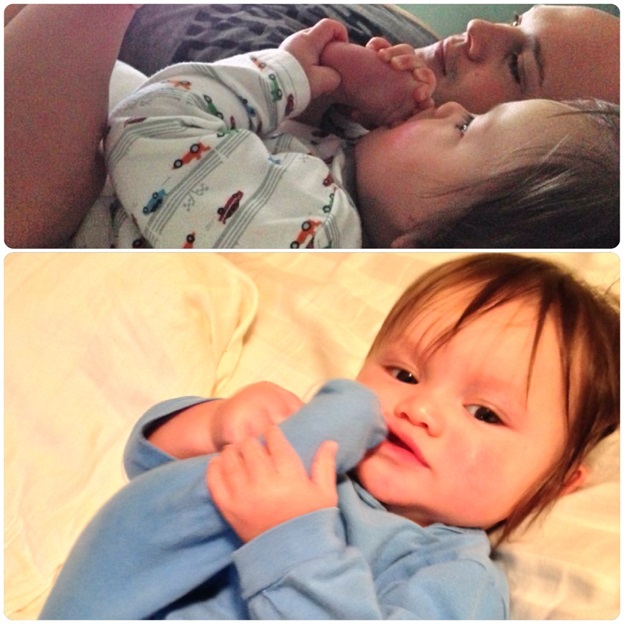 He was almost able to reach the toys and he was almost getting his feet in his mouth and now he’s actually doing these things. Wah! In all seriousness though, how is it that six months have passed?

He’s still loving his baths and eating his vegetables (carrots, squash, and sweet potatoes have been a hit while green beans are a total bust [and I’ve tried three times now!]). 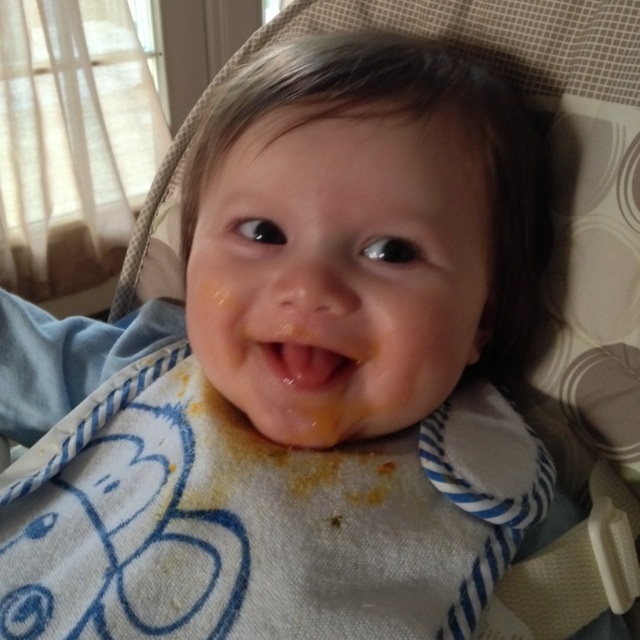 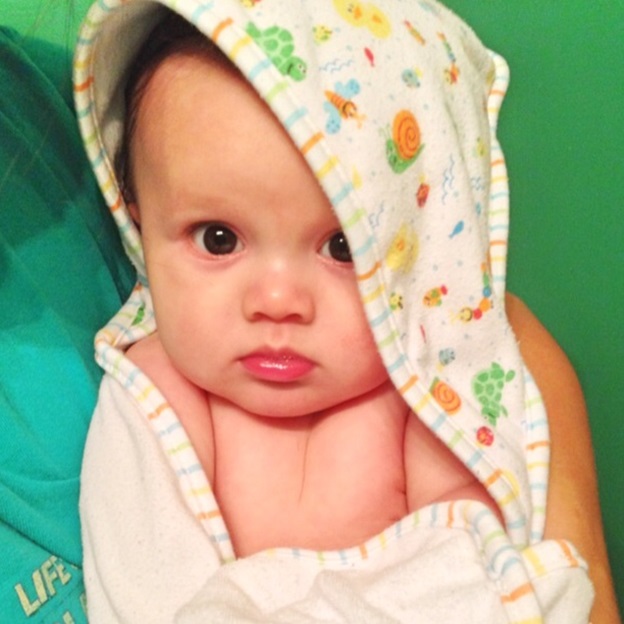 He LOVES sleeping on his side now too. I always lay him down on his back, but I always wake up with him on his side. 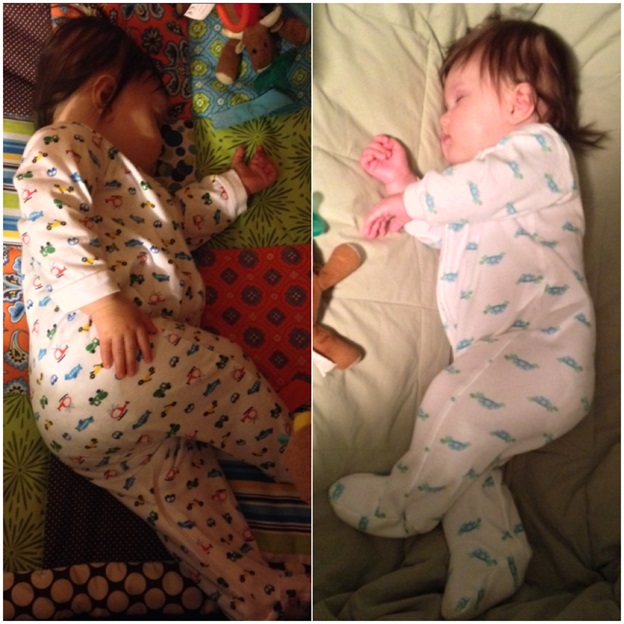 In Peanut’s last post (Peanut at Five Months) he was almost rolling over to his tummy. It was like he could get to that point of almost being on his stomach and he’d throw himself back to being on his back again. Well, I can confidently say that this boy is on the move! He is rolling all over the place! One night Hubs laid out a blanket in the living room so Peanut could roll and stretch. Hubs looked away for .5 seconds, looked down, and Peanut was almost four feet away just a rollin’ along. (And he actually LIKES being on his tummy! He was not a fan of it (at all) before!)

Peanut still sleeps in the play pen on my side of the bed and since it sits a little lower than my bed, I can sleep on my side (facing the play pen) and look down to check on him throughout the night. Well, the other night as I was dozing off (and Peanut was on his side, dozing off too) I shut my eyes and opened them really quick to check on him one more time and Peanut was on his tummy, head up, right in my face! I scared me at first but then I just couldn’t stop laughing. He just had this innocent look on his face like, “Hi mommy!” :]

Speaking of “mommy”, Peanut has definitely taken to his double word things. He started out with “bababababa” and if I say “mamamama” he will copy me. It’s so cute! And of course, he does the random babble quite a bit too. And I know this is totally crazy, but if you say, “mamamama” he looks straight at me. He knowsssss. (I kid, I know he’s too young to know, but it’s still cute.) 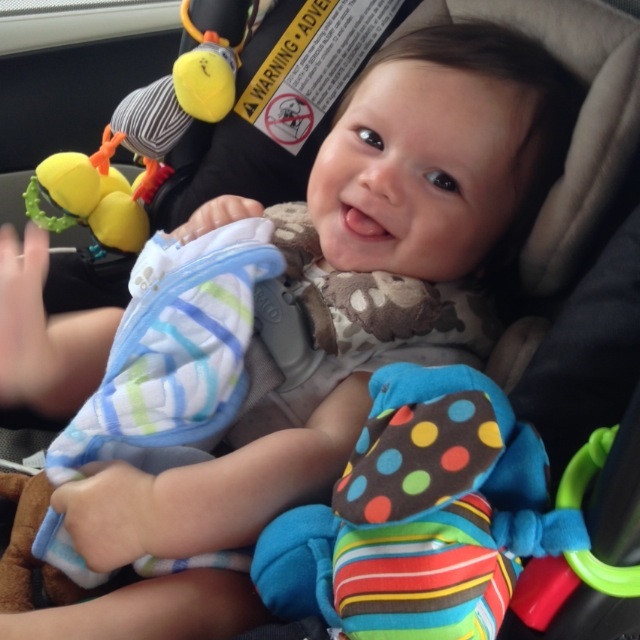 Peanut went on his first road trip this past month and he did AWESOME! Not a fuss to be heard! Six hours (one way)!!??? That’s pretty amazing. What can I say? I have a perfect baby. ;] 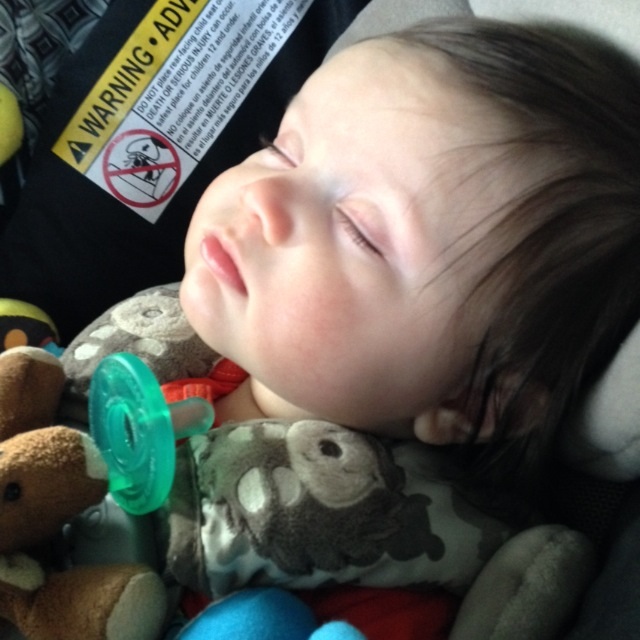 When he’s not dozing off in the car (8 times out of 10, the car puts him to sleep) he LOVES to look out the window. 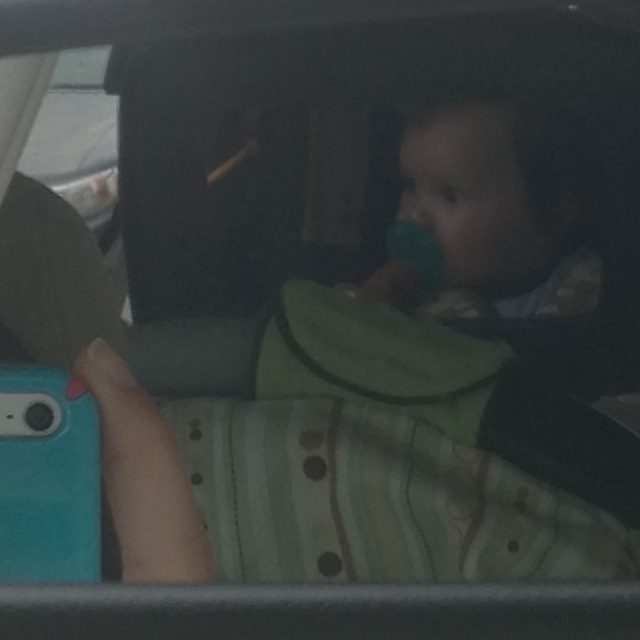 Or you know, totally melt my heart and hold my hand for the ride… 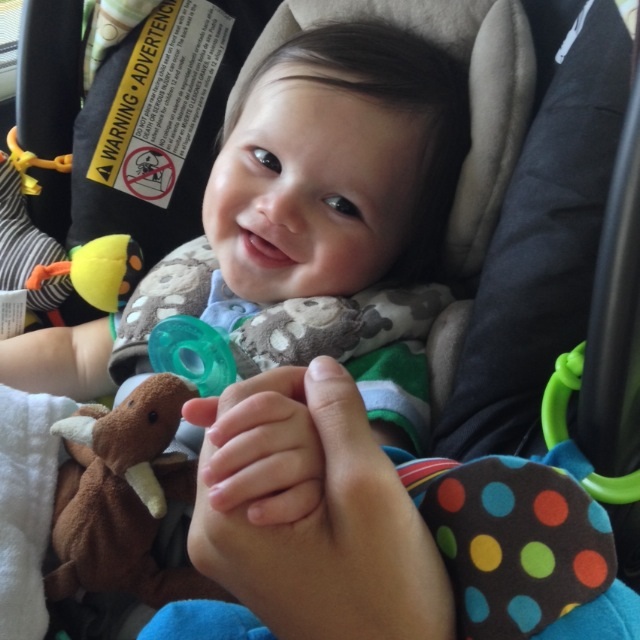 Hubs celebrated his first Father’s Day (thanks to Peanut, duh)… 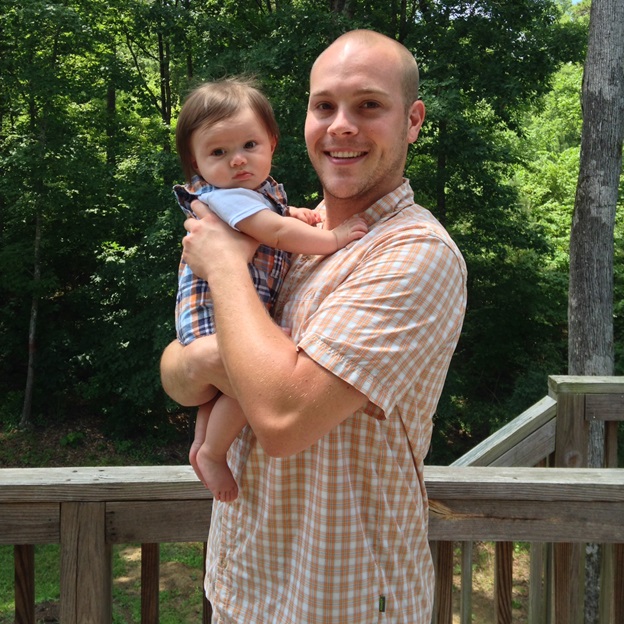 Peanut also loved the fireworks this past weekend (July 4th). Every time they went off he started flailing his arms and kicking like a crazy baby. He squealed and laughed, it was great! 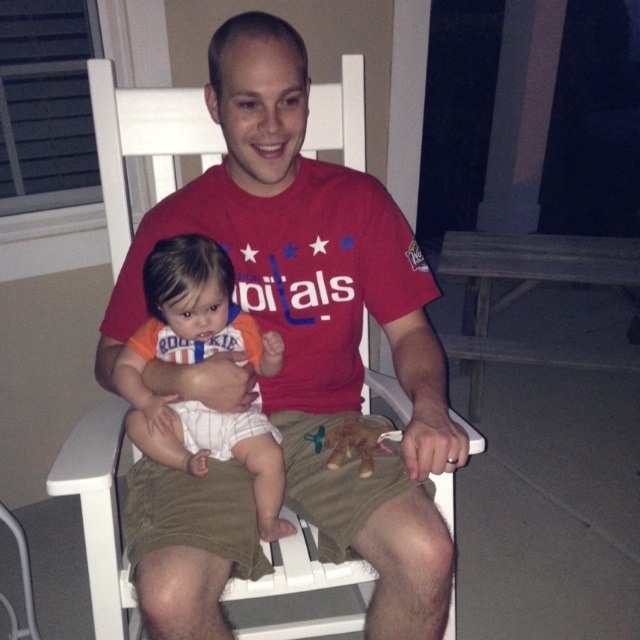 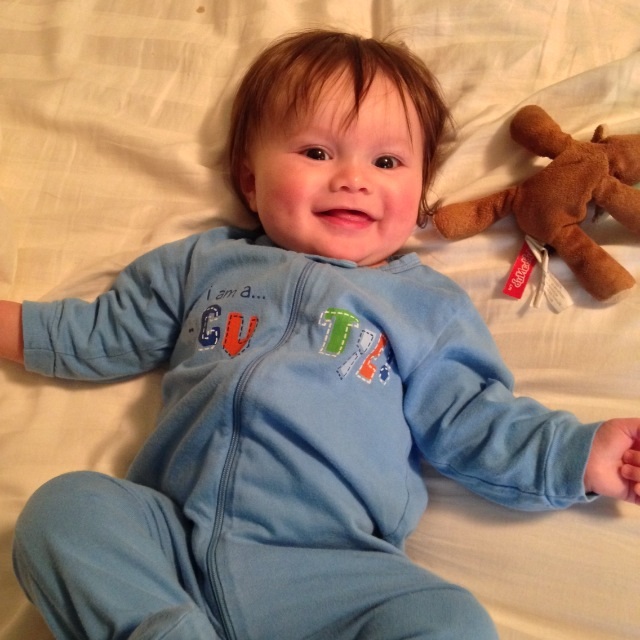 Six other things to know about Peanut at six months:

1. He does this random zombie squeal thing that’s cute, but kind of scary.
2. At his last appointment, a couple of weeks ago (we thought he was sick [he was not]), he weighed 15.8 pounds!
3. He loves his vegetables and all, but he will down some regular rice cereal!
4. He’s actually (finally) gotten into napping once (sometimes twice) a day. He didn’t nap much at all in the beginning.
5. When he’s crying (which is not that often), all you have to do is let him grab your fingers so he can stand and he’s all smiles and giggles.
6. He’s the bestest, happiest, smiliest, funnest baby EVER!

2 thoughts on “Peanut at Six Months” 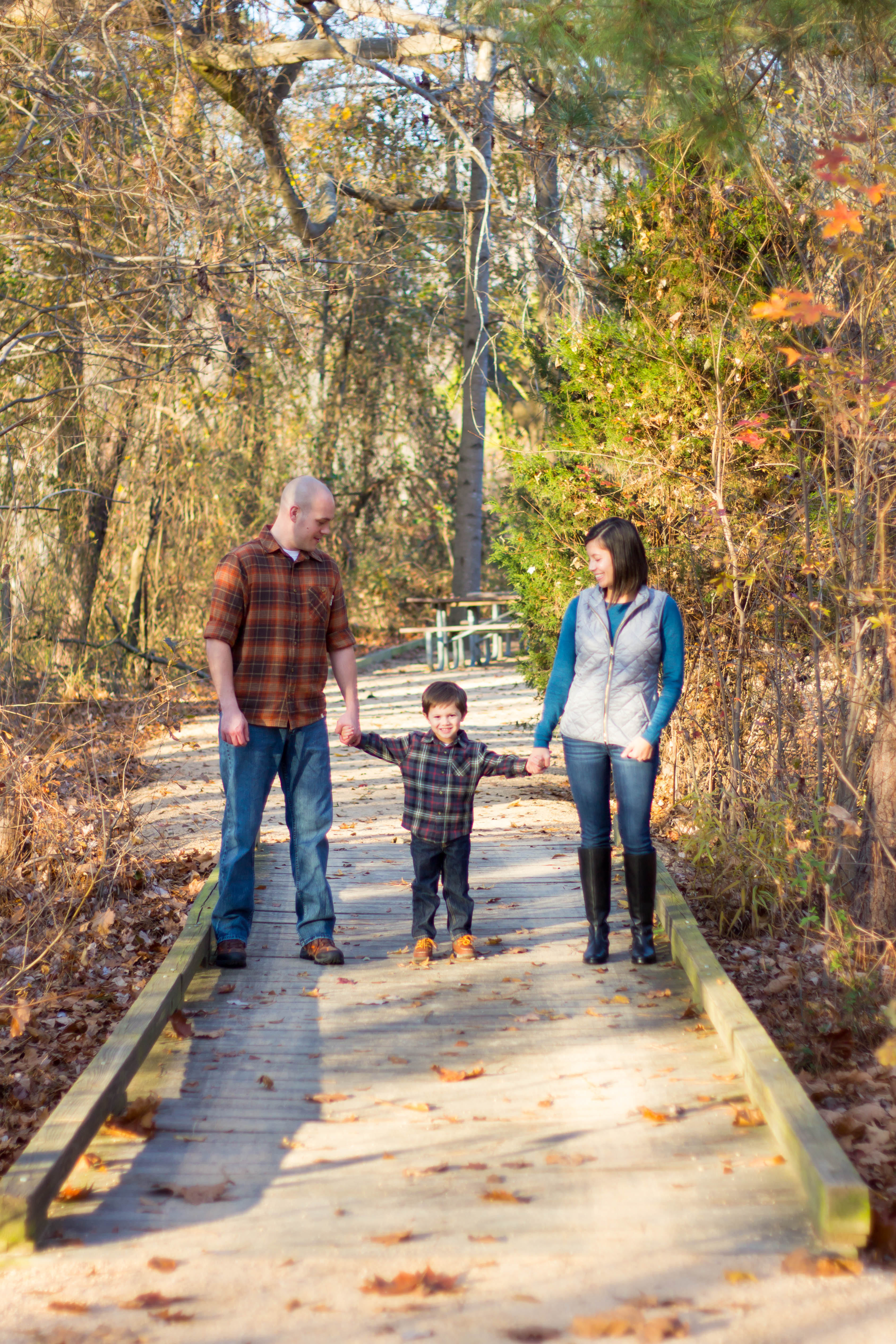