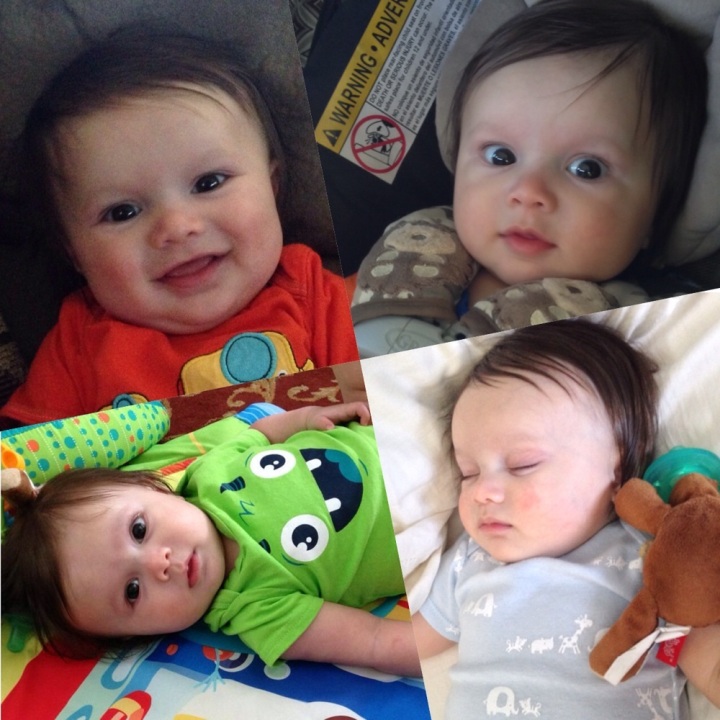 This little nugget is growing WAY too fast! True story.
I know I say this every time I post about Peanut, but where has the time gone?! I cannot believe he is five months old!! 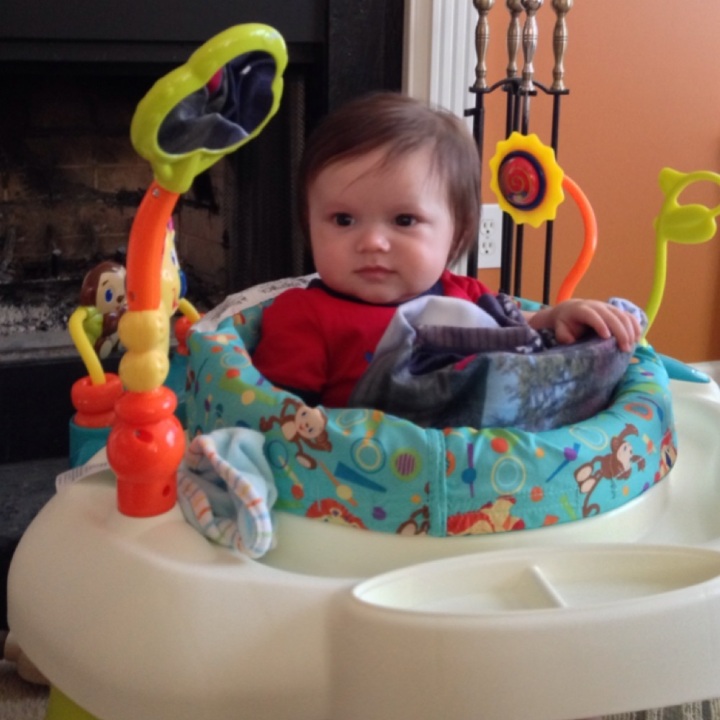 Peanut continues to be a happy little fellow! He is full on laughing now which is the cutest thing ever! He’s pretty ticklish so, of course, we tickle him ALL the time just to hear that laugh. Sometimes mid-laugh he will squeal and it’s the funniest thing. How can you hear a baby laughing and not laugh yourself?

He’s so strong too! The doctor’s told me at his one month, two month, etc. appointments that he’s a strong baby, and that he’s super observant. He’s been wide-eyed and curious since he was about a month old (when he stopped sleeping all day, every day) and he continues to be a curious baby. He doesn’t really nap during the day and I’m sure it’s because he doesn’t want to miss anything going on. I can tell when he’s fighting sleep – his eyes gets all pink, he pulls his hair, etc. and it’s really cute to watch. (Is that mean? lol)

Back to him being strong though, from a laying down position he can pull himself up (with the help of pulling on my hands ((not me pulling up at all though))) and he LOVES to try and sit up. Sometimes he sits up just fine, sometimes he nose dives forward, and sometimes he falls sideways. Like this: 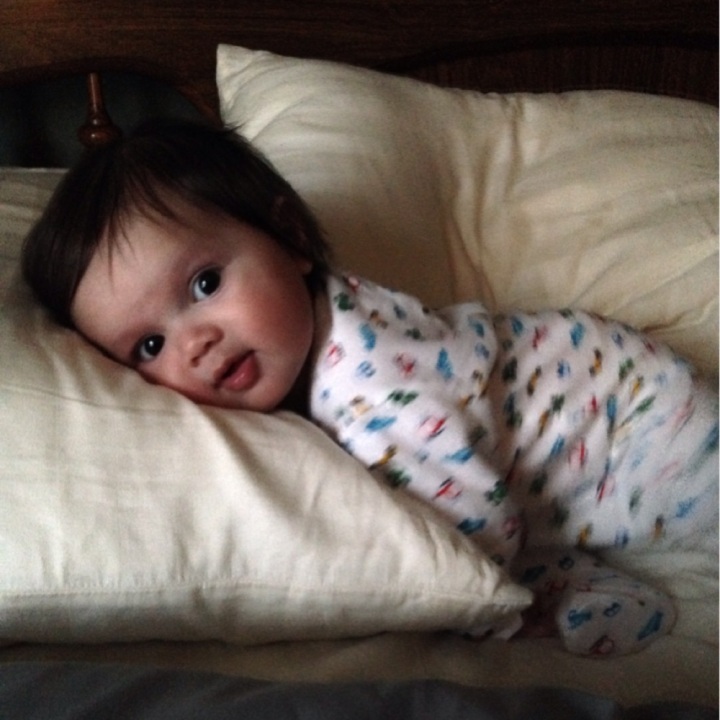 He is ALMOST rolling from his back to his tummy. I totally think he could do it. He gets all the way to his side and almost goes full over to his tummy, and then he throws himself back to his back. Little stinker. He will gladly, easily roll from tummy to back though.

He’s been grabbing at clothes and what not for a month or so now, but I love that he’s grabbing at my hands and hair now. Peanut loves to stroke Hubs’ face and grab his nose. I’ve noticed that he tends to reach for my hands and always holds my fingers. 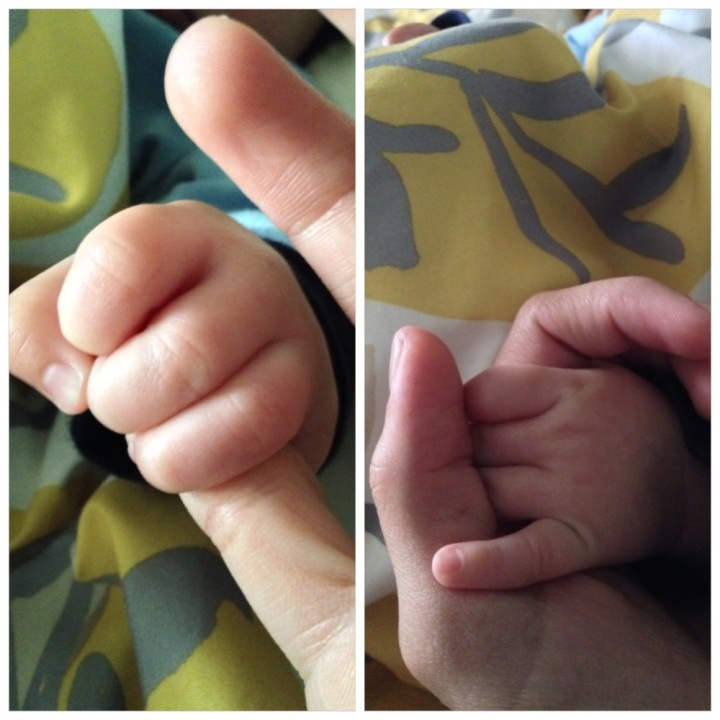 I have a video of Peanut running his hands through my hair too. So stinking cute. ❤

We are so so so lucky that Peanut is such a great sleeper (at night). I’ve said this before, but he’s pretty much been sleeping through the night since we brought him home from the hospital. He goes down between 9:00-10:00 PM and his first feeding is at 6:00 AM. Every now and then he will fuss, but it’s nothing I have to get out of bed for. Half the time he even falls back to sleep on his own (now that he knows how to put his pacifier in his mouth by himself!) and the other half of the time I just stroke his little cheek and he’s soothed. 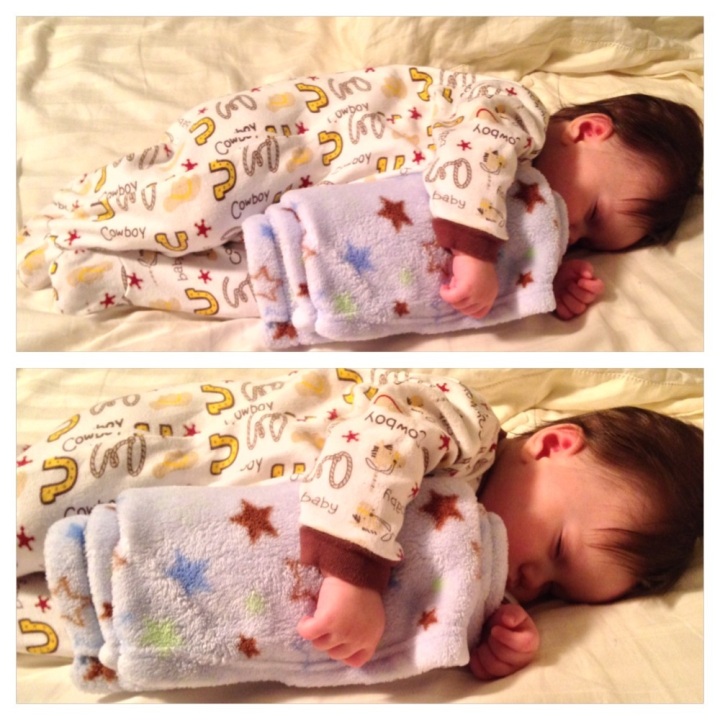 Five other things to know about Peanut at five months:

1. He still loves bath time and tries to sleep in the bath.
2. I was concerned with his pink, warm cheeks but I read it’s the first signs of teething.
3. Not to brag (okay, I’m bragging a little) but he is seriously the easiest baby ever. The girls at Hubs’ softball games tell me ALL THE TIME that he is just the perfect baby. ❤
4. He still has no eyebrows.
5. He LOVES his carrots! It’s time for something new though. I think I’m going to do green beans next.

7 thoughts on “Peanut at Five Months”